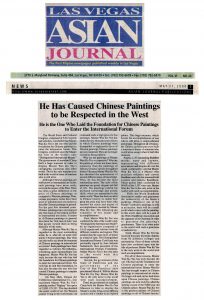 He Has Caused Chinese Painting

to be Respected in the West

He is the One Who Laid the Foundation for Chinese Paintings

to Enter the International Forum

The World Poets and Cultural Congress, Composed of 5,612 experts and scholars, concluded that Master Wan Ko Yee is the one who laid the foundation for Chinese Paintings to enter the international forum. This Congress conferred upon the Master the title of the world’s only “Distinguished International Master.”

The government of mainland China built a huge museum in order to display Master Wan Ko Yee’s calligraphy, paintings and other works. This is the only museum ever built in the world in honor of someone who is still alive.

Although Master Wan Ko Yee is regarded as the most outstanding artist, he is, after all, an artist who paints Chinese Paintings. But what can one really say about the treatment of Chinese paintings in international art circles? Such Paintings have been regarded as inferior. Nevertheless, something quite extraordinary has happened. Master Wan Ko Yee has truly become the one who has laid the foundation for Chinese paintings to enter the international forum. Not only has he laid this foundation, he has also become the one who has caused Chinese Paintings to surpass Western paintings.

On May 28th, Unique Art Collections International Co., Ltd. auctioned Master Wan Ko Yee’s painting entitled “Majesty” for a price of US$2,125,327. This has shocked the entire world of art. No Western painter living in the world today can command such a high price for his paintings. Master Wan Ko Yee has ended the few thousand year old era in which Chinese paintings were disregarded or neglected in favor of Western paintings. Chinese paintings are now respected. They are no longer viewed as being inferior.

Why are the paintings of Master Wan Ko Yee so expensive? Why are his paintings at least ten times more expensive than the paintings of famous Chinese artists throughout history? Because Master Wan Ko Yee has absorbed the quintessence of several different areas of knowledge. Thus, he has become the most outstanding artist. The style of his paintings are grand, elegant and full of life. His paintings exhibit his profound knowledge and artistic skills, which are unmatched in the entire world. There has been no artist in Chinese history, no matter how great the artist may have been, who reached the status and degree of accomplishment reached by Master Wan Ko Yee. The following are examples of his status and accomplishments:

First, Master Wan Ko Yee was conferred the title of the world’s only “Distinguished International Master” by an organization composed of 5,612 experts and scholars from 48 different countries and regions. This position has the same level of honor as a head of state. The Distinguished International Master Certificate was personally signed by Juan Antonio Samaranch, then president of the International Olympic Committee. Master Wan Ko Yee is the only artist in the world with this accomplishment.

Third, the government of mainland China built the Master Wan Ko Yee Museum in order to display the Master’s works. It has seven different sections and is similar to an imperial palace. This huge museum, which honors the accomplishments of one who is still alive, is unprecedented and unique. Throughout all of history, the Chinese government never built a museum in honor of someone who is still alive except when it built this museum.

Fourth, 2,137 outstanding Buddhist monks, nuns and laymen, representing 416 different associations and temples all over the world, confirmed by vote that Master Wan Ko Yee is a Master who practices orthodox and correct Buddhism and who has mastered both exoteric and esoteric Buddhism. These Points were confirmed by 99.6% of the 2,137 votes cast. Master Wan Ko Yee is the only artist in the world with such accomplishment.

Fifth, the World Buddhism Association verifies and guarantees the authenticity of the Master’s painting. Whenever one of the Master’s authentic paintings is sold at an auction, there will be s small scroll which comes with the painting. In this scroll, there will be a seal of the World Buddhism Association and the signature of its Chairman in order to guarantee the painting’s genuineness. There is no other artist in the world with such a guarantee of authenticity.

Sixth, Master Wan Ko Yee has received honorary doctorate degree from 92 different colleges and universities. Four of these schools have also conferred upon him the title of professor. Master Wan Ko Yee is the only artist in the world with such accomplishment. 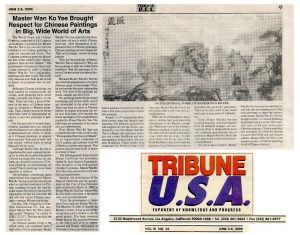